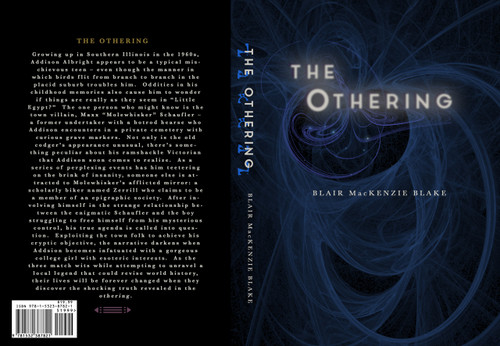 2ND Printing of the First Edition limited to only 200 copies

Featuring glossy new cover artwork, the 2nd issue of my novel entitled “THE OTHERING” (about 88,000 words) concerns the disturbing effects that glimpses of an artificial (?) parallel world have on one person while growing up in a small Midwestern town whose other residents are unable to perceive even traces of the ‘futuristic’ strangeness that he explores behind the scenery of consensus reality.

Growing up in Southern Illinois in the 1960s, Addison Albright appears to be a typical mischievous teen – even though the manner in which birds flit from branch to branch in the placid suburb troubles him.  Oddities in his childhood memories also cause him to wonder if things are really as they seem in “Little Egypt?”  The one person who might know is the town villain, Maxx “Molewhisker” Schaufler – a former undertaker with a hotrod hearse who Addison encounters in a private cemetery with curious grave markers.  Not only is the old codger’s appearance unusual, there’s something peculiar about his ramshackle Victorian that Addison soon comes to realize.  As a series of perplexing events has him teetering on the brink of insanity, someone else is attracted to Molewhisker’s afflicted mirror: a scholarly biker named Zerrill who claims to be a member of an epigraphic society.  After involving himself in the strange relationship between the enigmatic Schaufler and the boy struggling to free himself from his mysterious control, his true agenda is called into question.  Exploiting the town folk to achieve his cryptic objective, the narrative darkens when Addsion becomes infatuated with a gorgeous college girl with esoteric interests.  As the three match wits while attempting to unravel a local legend that could revise world history, their lives will be forever changed when they discover the shocking truth revealed in the Othering.