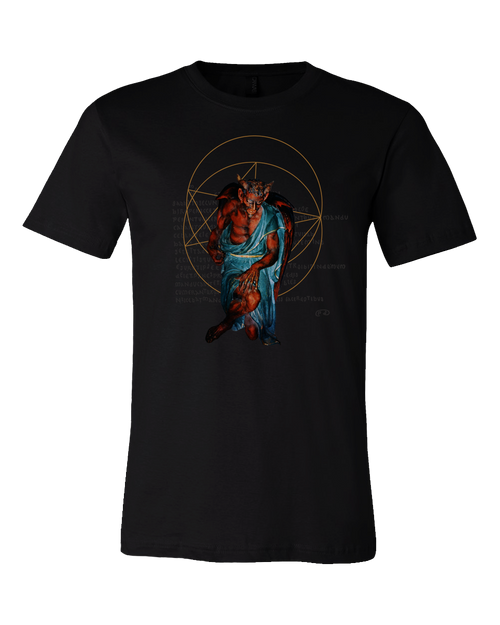 Using a photograph taken by DANNY CAREY nearly 20 years ago – the design of his new tee shirt contains several elements associated with the enduring mystery of Rennes-le-Chateau in the south of France.  It was in 1891 that the impoverished parish priest of a tiny Pyrenean village discovered something that enabled him to acquire great wealth.  His initial find is believed to have been coded parchments that were sealed and hidden inside a column that supported the 11th-century church’s ancient altar stone.  Once deciphered, certain anomalies in the Latin Biblical text revealed pentagonal geometry that hinted to a vast pentagram of natural landscape features in the area that some consider to be the perfect location to conceal something of earth-shaking importance.

Although it is still not know exactly what it was that dramatically changed the priest’s fortunes, he may have left behind clues in the bewildering mass of garish, near blasphemous religious imagery. Among the phantasmagoric Christian iconography designed by the priest while refurbishing the dilapidated church is a frightening plaster demon that still greets visitors in the doorway.  He has been identified as ASMODEUS, the legendary guardian of hidden treasures and custodian of secrets. With its ingeniously embedded enigmatic clues, many believe that the church itself is a treasure map that the obstinate and mischievous priest devised to immortalize the secret of his sudden riches.

Yet, with the priest’s many nocturnal excavations and other strange behavior, the bizarre decorations in the church might actually be a REVERSE treasure map.  As strange as this concept might seem, in a place of mirror opposites, the persistent theme of treasure and death (death and treasure) offer oblique hints of a powerful secret shared throughout history by a privileged few.