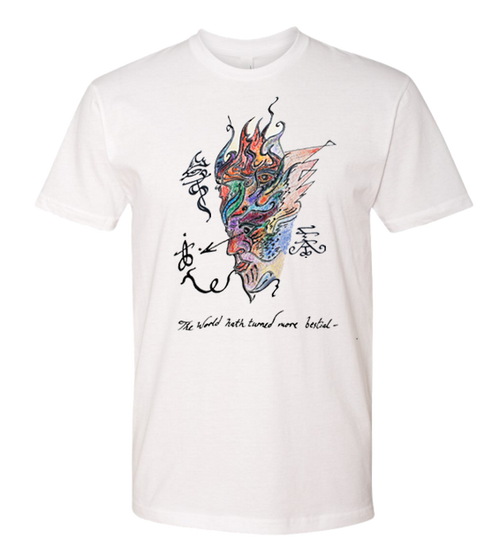 Introducing “Dracomantes”, the new DANNY CAREY tee shirt design inspired by an original talismanic illustration by Andrew D. Chumbley (former Magister of Cultus Sabbati). As an avid collector of esoteric books, one of Danny’s most prized possessions is a copy of “QUTUB” (also called The Point) written and illustrated by the Brittish Magus and Artist, Andrew D. Chumbley (published by Fulgur for Xoanon in 1995) that contains the unique addition of hand drawn talismans, verses, and sigillised insciptions.

For the shirt concept, the Chumbley illustration has been carefully re-arranged so as to be be presented as a cryptogram within a cryptogram involving the REVERSE of “atavistic resurgence” or,  even more to the point, the preparation of antinomy.

One of the key lines in the verse reads:

And, I, the Shadow of that form, have crept to veil the Golden Dawn.”

This passage (along with the appropriate sigils and other magical glyphs) concerns the powers of self-overcoming by knowledge involving universal (multiversal?) points of transmutation.  Another line involving the Telesmata of the Way,  “The World hath turned more bestial…”, is also quite revealing in light of transcendental sorcery, in particular, Chumbley’s focus of the arcana of the Sabbatic Mysteries.

Wear the shirt as an expression of your ultra-sane personality!