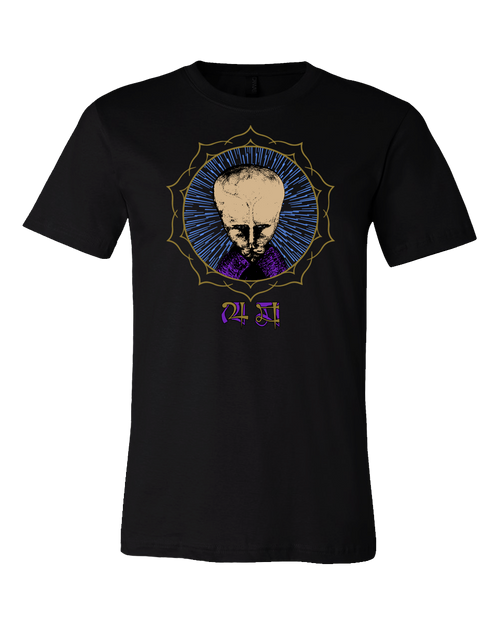 “My pictures look more beautiful if you look at them with your eyes closed.”
A.C.

Aleister Crowley’s portrait of LAM was first published in 1919 as the frontispiece of his commentary of Helena Petrovna Blavatsky’s “The Voice of the Silence” in the Equinox Vol III, No 1 (better known as “The Blue Equinox”).  Although it is uncertain when Crowley drew the enigmatic image of LAM (meaning The Way or Path), most researchers believe it was ‘conceived’ during “The Amalantrah Working” and displayed as part of the Beast’s “Dead Souls” exhibition in New York in 1919.  Afterwards, it remained all but forgotten until mentioned in Kenneth Grant’s “The Magical Revival” in 1972.  As a young student of Crowley in 1945, Grant was given the drawing as the prize from his master after guessing the work’s title. (Actually, Grant wasn’t spot on that spring day, but nevertheless received that which he coveted for services rendered.) After issuing the “Statement on LAM” in Starfire magazine Volume 1, number 3 (1989) that described the procedures (and banishings) of using the image in magical workings, many practitioners of the ‘deep end of the pool’ Nightside rituals – those who sought traffic with praeter-human entities - began to utilize the LAM tool as a mode of entry into alternate dimensions or realms of consciousness. To these intrepid “Lamanauts”, the “Mask of Aiwass” unlocked a portal or gateway outside one’s terrestrial module, functioning as a means of establishing contact and key to the mysteries of our ultra-terrestrial nexus.

Besides a rendition of the haunting portrait of LAM, the tee design also incorporates the styled 49 drawn below the original image, which might also be the Tibetan characters (Senzar?, Zhang-zhung?) for LA and MA.

“Thou canst not travel on the path before thou hast become the path.”
Verse 49 (The Voice of the Silence)