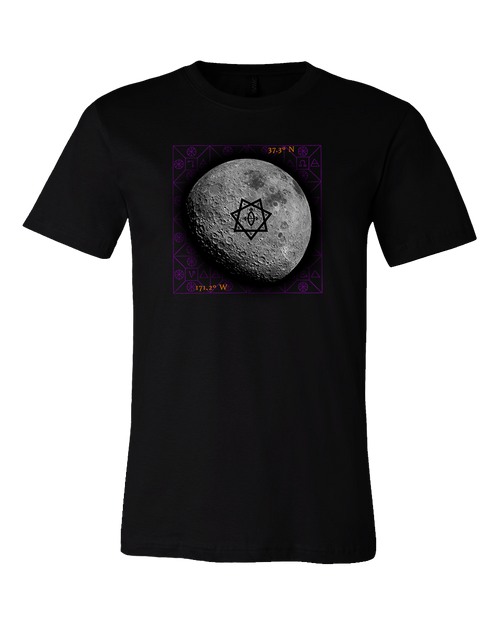 The theme of Danny’s new tee is Jack Parsons – a pioneer of American space exploration and one of the founders of JPL (sometimes dubbed “Jack Parsons Laboratory”) in the 1930s.  While involved with jet propulsion and creating fuel for multistage rockets, Parsons was also a card-carrying member of Aleister Crowley’s occult fraternity that experimented with sexual-magico techniques.  Assisted by an elemental/scarlet woman named “Candy Cameron”, one of the magical rituals Parsons engaged in (“The Babalon Working”) was specifically designed to produce a “moonchild.” The result was “Liber 49” – a magical transmission that Parsons believed to be a fourth chapter of Crowley’s “The Book of the Law.” Libertarian, philosopher, occultist, rocket engineer and explosives expert, Parsons died in an explosion from the highly volatile fulminate of mercury in his Pasadena garage in 1952. For his many contributions to the fledgling space program, the International Astronomical Union named a large impact crater on the far side of the moon after him in 1972.